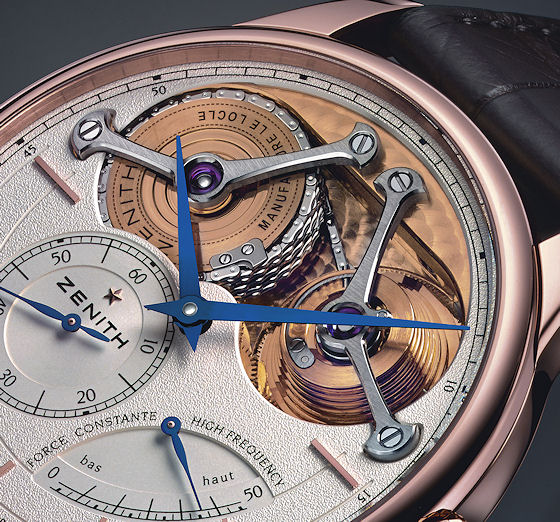 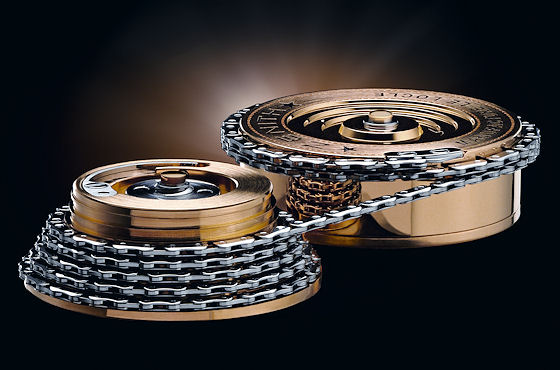 The chain that acts as the transmission between the barrel and the fusée
comprises 575 parts and measures seven inches long. Though it appears
quite delicate, the chain is able to withstand the repeated application
of up to 3 kilograms of force. It took Zenith watchmakers two years to
accommodate the fusée and chain mechanism in the small space required
for this timepiece.

The fusée cone sits in between the barrel and the gear
train. The chain is attached to the bottom level of the fusée (the
widest part), and snakes around the cone wall, guided by a helical
groove, extending from the top level of the cone (the thinnest part) to
connect with the barrel. As the mainspring unwinds and the barrel turns,
the chain unwraps itself from the fusée and is slowly wrapped around
the barrel’s outer wall. When the mainspring is fully wound and pulling
on the chain with high torque, the fusée is being driven by its narrow
end. As the power runs down and the chain wraps further around the
barrel and so the weaker pull of the mainspring is compensated by the
increased radius of the fusée, keeping the torque constant.