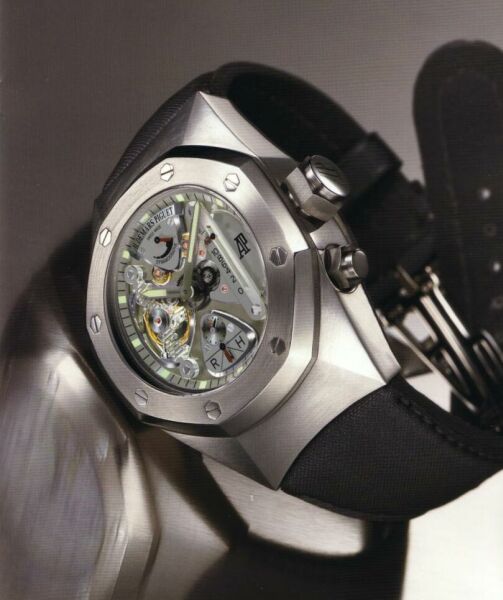 Alacrite 602 is a new super alloy consisting of 57% Cobalt, 31% chrome, 5% Tungsten, with trace amounts of carbon, silicon, and iron. This particular form of alacrite has a Vickers hardness rating of 430. Extremely difficult to machine, each Concept Watch case requires nearly 60 hours to complete

Following its adventure with Alinghi, which has become the new ‘Defender’ of the America’s Cup, Audemars Piguet also proposes the Royal Oak Offshore Alinghi Polaris, featuring, as its name indicates, a rotating flange to orient oneself as a function of the sun (all you former Boy Scouts would appreciate this). Still, the essential of the watch is elsewhere - in the flyback chronograph adapted to the complex procedure for the start of the America’s Cup race. At the first shot, the minute hand in the centre makes the revolution of the dial in ten minutes. At the second shot, the flyback function stops the timing, goes back to zero, and restarts instantaneously. At the third shot, a red disc appears progressively in a window.