One of the most frequent questions I get about watches is usually “what is a Tudor?” or “are they a Rolex?”

Tudor watches are a brand of wristwatches made by Rolex, using Rolex modified movements, which are supplied by Swiss Ebauche manufacturers.

The cases are similar to Rolex models and often are sold with Rolex’s famous Oyster case. During the period when both Rolex and Tudor used acrylic crystals, the Tudor and Rolex models would often share a similar depth rating.

Many Tudor models up to the 1990’s were sold with Rolex signed bracelets and crowns also.

The Tudor line can be traced all the way back to the beginning of the 20th Century. The earliest Tudor I have owned dated to the 1930’s and used a caliber 59 movement, also used in the Canadian market Rolex’s.

Over the years various models have been produced in an attempt to increase the brand’s market presence. The most popular model Tudor has produced is most likely the Submariner. Early models used a modified Fleurier 350 caliber, branded the Tudor 390 caliber. These are often mistaken as Rolex movements as they shared a similar rotor winding device.

During the mid to late 1960’s Rolex switched to another manufacturer, ETA to supply the base movements for their watches. These Early Submariners have become quite collectible. The increase in value has led to a large quantity of fakes penetrating the market. These are being produced in the Far East and are easily spotted upon close examination along with some investigation into what the real model should look like.

Other popular models are the older Chronographs as well as the Ranger and Ranger 2 models, which rode the wave of market demand created by the Rolex Explorer 1, reference 1016. Both watches share a similar dial configuration.

So are these watches considered “real Rolex’s?” I would say NO! However Tudor watches have earned a place at the forefront of watch collection as they are a unique product that reflects on the history the of the Rolex Watch Company. Actually in some cases particular models actually sell for more than some popular vintage Rolex models.

To those who complain about the Rolex modified movements and suggest it makes them less desirable, perhaps you need only examine the phenomena of the Rolex Daytona, which used a modified Ebauche movement up until 2002, I would suggest no one considers those watches les than acceptable Rolex’s. 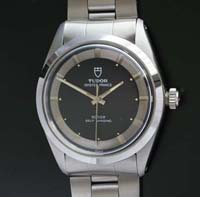 What are Tudor watches? - Used and Vintage Watches for Sale

Tudor watches are very similar to Rolex watches but are distinctly different. The history of the brand and some reasons many collectors seek them out.